Provisions and Status of the Affordable Care Act

The Affordable Care Act (ACA) has been the subject of some of the most contentious public debate in recent years, but many Americans are still misinformed about all or part of what the legislation entails. Though no law is perfect, the ACA has the potential to expand coverage opportunities and make access to healthcare more effective, particularly for people with cancer.

Health insurance coverage and access to screenings are fundamental in the fight against cancer, and treatment and prognosis can vary drastically, largely depending on the stage at diagnosis. Regular screening for cancer can result in early detection and management of the disease at a time when treatment is most effective (and most affordable for the patient and the healthcare system as a whole). Unfortunately, many people are uninsured or underinsured when they learn that they have cancer. According to the 2010 Census, over 50 million people in the United States have no form of medical coverage—and according to the American Cancer Society, half of all men and one-third of all women in the US will develop cancer during their lifetime. 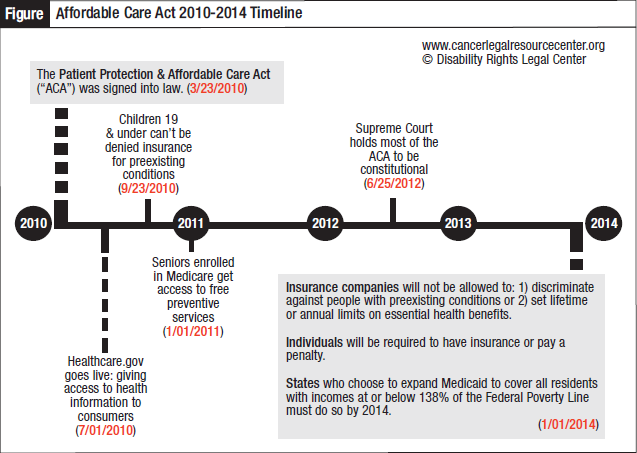 Starting January 1, 2014, PCIPs will be phased out of existence because the ACA requires insurance companies to begin covering all adults regardless of preexisting conditions. Congress envisioned gaining insurance companies’ support for this component of the law by creating the “individual mandate,” a requirement that all Americans have healthcare coverage of some kind or pay a penalty. While it remains to be seen how affordable many of these plans will be and what the benefits will include, there will now be government oversight in an area where there was none.

Some of the ACA’s other protections for people with preexisting conditions are already in effect. As of September 23, 2010, children 19 years and younger cannot be denied insurance due to a preexisting condition. In addition, young adults up to 26 years old are now eligible for coverage under their parents’ insurance. In 2011 alone, an estimated 6.6 million young adults retained access to coverage solely because of this provision.

Other important consumer protections of the ACA include a mandate that insurance companies provide certain preventive services at no cost, the right of patients to have external health insurance appeals, and the elimination of rescissions of insurance policies when there is no fraud. This means that patients won’t have to pay copays or deductibles for certain preventive services, they will have an option to appeal insurance decisions to an independent medical review board, and they will no longer experience retroactive cancellation of coverage because of mistakes or honest omissions on insurance applications.

Though many of the ACA’s reforms have already gone into effect, 3 other big changes will come in 2014. First, every person will be able to participate in health insurance exchanges—tools for comparing insurance choices so that consumers are better informed about their options. Second, insurance companies will no longer be allowed to place annual or lifetime limits on policyholders for essential health benefits, meaning that people won’t be cut off from services because their treatment costs reach a certain dollar amount. As some health plans had policy limits of $50,000, cancer patients could reach—and surpass—total plan allowances in a single day, having to pay out-of-pocket for all future costs. Third, in 2014 many states will expand Medicaid to include new populations, although this component of the ACA was somewhat limited by the US Supreme Court. As it currently stands, Medicaid is a national program that provides medical care to low-income individuals who are blind, who are age 65 or older, or who have a disability through the Aged, Blind, and Disabled program.

Earlier this summer, the Supreme Court heard 4 challenges to the ACA. First, the Court determined that the individual mandate was constitutional, meaning that Congress can require that all people have healthcare coverage or pay a penalty. Second and third, the Court looked to 2 largely technical issues, whether the Anti-Injunction Act precluded the Court from hearing the case at all and whether “severability” would have made the rest of the ACA unconstitutional if the individual mandate component were struck down. Fourth, the Court looked at whether Congress could force states to expand Medicaid to include all lowincome individuals (below 138% of the federal poverty line) by 2014, or lose all federal Medicaid funding. While this expansion will be fully funded by the federal government between 2014 and 2017 and will be funded at 90% for the years to follow, the Court held that instead of forcing states to expand coverage, Congress had to let states choose expansion.

Though many of the major changes have yet to occur, the Affordable Care Act has already begun to significantly increase access to early and more comprehensive care for people with cancer.