At the Academy of Oncology Nurse Navigators (AONN+) 4th Annual Conference in November, one outstanding nurse was recognized by her peers for her dedication and commitment to the profession. The 2013 ONE Award winner was Libby Daniels, RN, OCN, from Lexington Medical Center in West Columbia, South Carolina.

Nominated by a colleague who is studying to be a nurse practitioner, Ms Daniels made a lasting impression on her in a very personal way. “Libby’s exceptional knowledge and patient skills became even more evident to me when the oncology experience became personal after my grandfather was diagnosed with stage IV lung cancer,” the colleague wrote. “Libby heard about my grandfather’s diagnosis, and even though he was not one of her patients, she immediately offered her assistance. Libby has been there for my whole family around the clock offering information, guidance, or just a listening ear—clearly illustrating that being an oncology nurse navigator is a way of life to her and not just a job. Some might say that oncology nursing is her ‘calling,’ and I would certainly agree.”

In a phone interview held after she returned home from the conference, Ms Daniels reflected on the case that led to her nomination. “My colleague’s grandfather had recently been diagnosed with stage IV lung cancer. They were having some family dynamics going on about whether to do treatment or not. I basically said to my colleague, ‘That’s what I do. I’m a nurse navigator. I can meet your family, be the mediator, and explain all the pros and cons of the different courses of treatment for you.’ We held a family meeting where we let each family member talk about how they felt and what they thought would be best for their loved one,” she explained.

“In talking to her grandparents, I found that he wanted to try chemotherapy for his family. Through the process of talking to and getting to know the family, one of the main goals that I learned her grandfather had was that he and his wife were soon going to celebrate their 60th wedding anniversary.

“His main concern,” Ms Daniels continued, “and he just kept saying it over and over, was ‘I don’t want to be a vegetable.’ He kept talking about his anniversary, how he and his wife had been married for 60 years, how they had always been together. They didn’t know what life was going to be like not being together.”

There was a particularly heart-wrenching moment when the grandfather asked her, “Can the chemotherapy cure me?’’ and Ms Daniels had to tell him that it would not. That’s when the 3 of them—the patient and his wife and Ms Daniels—talked about his goals and how important his quality of life was to him. Ultimately, his “treatment goal” was to be married for 60 years.

“I went back to my colleague and I said, ‘I really feel like the reason why he’s doing this chemotherapy is because he’s got a goal. His goal is to be married for 60 years.’ He ended up doing the treatment until he reached that goal, and he passed away on the day of their 60th wedding anniversary,” Ms Daniels reflected.
Anyone can imagine what that experience would be like for the family of that patient. But what was that experience like for the nurse who navigated that patient to the end of his life, a patient who passed away on the very day of his 60th wedding anniversary?

“When you’re in your 80s, you know life can come to an end, but life isn’t always about our lifespan. It’s about reaching goals and fulfilling dreams. That was the closest goal that he knew he was going to be able to reach. That was very important to him,” Ms Daniels explained.

“It was very emotional for me, because my parents are not much younger than he and his wife. I know what it’s like to have spent that many years with someone. You’re celebrating spending your life together but at the same time you’re saying goodbye to one another. That’s very difficult,” she said.
“When he asked me if he could be cured and I told him he couldn’t, yes, I cried, because you can’t lie to your patient,” Ms Daniels continued. “You just can’t lie. It was hard for his son to hear that because the grandfather was the family patriarch. But he did it the way he wanted to. He did it with dignity, he reached his goal, and he was able to pass away on his terms.”

“I feel like in nursing—and especially in oncology nursing—a lot of times you just have to listen because sometimes it’s not about wanting to live for 6 more months, it’s about the goals that the patient wants to reach and that’s very important,” Ms Daniels explained. “None of us know how long our life is going to be. But if there’s something big to look forward to—a wedding, or a grandbaby about to be born, or a grandchild about to graduate from college, they’re goals that these patients with cancer strive for, a reason to do that extra chemotherapy, to get a little bit stronger, to tough it out so they can reach their goal.”

After the initial shock of hearing her name called as the ONE Award winner wore off, Ms Daniels had an amazing experience at the conference. “I was very humbled when a nurse from California, or one from Canada, or one from Minnesota, came up and said, ‘I voted for you,’” she shared. “I don’t know these nurses. To have that said to you by complete strangers is very, very humbling. I’ve met some new friends that I would have never met. And it’s just really cool to be able to sit and talk to other nurses and it’s OK to say all the gross things that we nurses talk about, because we all speak the same language.”

Ms Daniels’ trip home from the conference was more than memorable as well, and not just because of weather delays. “I didn’t get home from the airport until after midnight,” she recalled, “and my parents were sitting there at the gate and they walked up to me and they could not stop hugging me. They said, ‘You will never know how proud we are of you.’”

Her mother is a breast cancer survivor, and her father is a lung cancer survivor. “I am 52 years old, and my parents are my everything,” Ms Daniels explained. “They’re the reason why I do the things that I do. So when they said to me, ‘We couldn’t be prouder and we couldn’t wait to see your award,’ and that they had been sitting there in the airport until after midnight when they’re 75 years old and should have been at home in bed—they waited 2 hours because my plane was late—that moment was just priceless to me.”

In addition to the plaque she received at the conference, Ms Daniels will be given $250 to donate to a charity of her choice. She’s chosen the Lexington Medical Center Foundation. The foundation, which recently celebrated its 20th year of operation, is funded by the medical center’s employees. The hospital holds fundraising events such as Women’s Night Out and Cancer of Many Colors, where money is raised to help not just patients with cancer but any patients within the hospital’s community who might need assistance. It even helps with employees who may have had a hard time or have gotten really sick. “A big part of the foundation’s success is because of employees giving back,” Ms Daniels explained.

Ms Daniels wished to express her gratitude to AONN+, award sponsors Bayer and the PAN Foundation, and all the nurses who voted for her. “You don’t often get a chance to be in a room with that many powerful women at one time,” Ms Daniels said. “So I am very grateful to the conference organizers and the sponsors for giving me the chance to attend the conference, and for the award that has made my parents so proud.” Giving People Hope as an Oncology Nurse
Laura Mulderrig, BSN, RN, OCN
Videos published on May 18, 2018 in ONE Award, Video 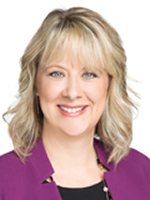