“The use of novel multiple myeloma drugs has been associated with improved therapeutic outcomes and survival, but the disease continues to pose a significant economic burden. Evaluating the economic implications and outcomes of available treatments is important to improve efficiency of care,” said David Merola, PharmD candidate, Bernard J. Dunn School of Pharmacy, Shenandoah University, Winchester, VA.

For this study, Mr Merola and colleagues analyzed the extent of workplace productivity loss in the United States among adults with multiple myeloma and its associated costs. These outcomes were compared among patients who received injectable versus oral multiple myeloma therapy. Mr Merola and colleagues used the Truven Health Analytics MarketScan Commercial Claims and Encounters with Medicare Supplemental Coordination of Benefits and Health and Productivity Management databases. Patients aged ≥18 years who were diagnosed with multiple myeloma between January 1, 2008, and December 31, 2014, were included in the study and were followed until December 31, 2015. The patients were analyzed 1 year before and 1 year after their first diagnosis.

Mr Merola and colleagues evaluated productivity loss using several key variables found in workplace absenteeism, short-term disability, and long-term disability claim files. The cost of productivity loss was calculated for each patient by multiplying the number of days lost to absenteeism by the average daily wage for all occupations in accordance with the US Bureau of Labor Statistics.

According to Mr Merola and colleagues, an interrupted time-series analysis showed a significant increase in missed workdays per month after the initial diagnosis of multiple myeloma for both treatment groups. Patients who received injectable therapy experienced an immediate increase of 6.9 lost productivity days per month (P <.001) compared with 4.4 days per month in patients who received oral therapy alone (P <.001). The difference in these values was not statistically significant, said Mr Merola, although a strong trend was observed (2.5 days per month; P = .057).

Further studies are needed to elucidate the differences in outcome between patients receiving oral and injectable chemotherapies, Mr Merola and colleagues concluded. 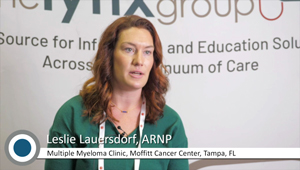