“The ClarIDHy study demonstrates for the first time the feasibility and clinical benefit of targeting a molecularly defined subgroup in cholangiocarcinoma. It shows that targeting mutated IDH1 with ivosidenib significantly improves progression-free survival and gives a favourable trend in overall survival in patients with advanced IDH1-mutated cholangiocarcinoma,” said Dr Abou-Alfa.

“The findings mean all patients with cholangiocarcinoma should be tested for IDH-1 mutation. Tumour mutation profiling should be a new standard for the care for patients with this heterogeneous tumour type,” he said.

A mutation in the IDH1 gene results in the production of the metabolite D-2-hydroxyglutarate that promotes oncogenesis. Approximately 15% of patients with advanced CCA have this mutation and could potentially benefit from ivosidenib.

In the global ClarIDHy phase 3 clinical trial, the median PFS was 2.7 months for patients randomized to ivosidenib compared with 1.4 months for those assigned to placebo (hazard ratio [HR], 0.37; P <.001). The data are the first to show clinical benefit with targeted therapy in CCA.

“The significant improvement in PFS by central review, the favorable OS trend, and the tolerable safety profile all support the clinical benefit of ivosidenib in patients with IDH1-mutated CCA,” said Dr Abou-Alfa. “This pivotal trial represents a practice-changing result, where genomic testing would become the standard of care and opens the door to more target-specific trials in this rare indication, where limited progress has been made over the past decade,” he emphasized.

In ClarIDHy, 185 patients with advanced CCA and IDH1 mutations were randomized in a 2:1 ratio to ivosidenib 500 mg orally in continuous 28-day cycles, or to matched placebo. Eligible patients had received 1 or 2 previous lines of therapy, including at least 1 regimen that contained gemcitabine (Gemzar) or 5-fluorouracil. Patients could cross over from placebo to unblinded ivosidenib with disease progression.

Ivosidenib was generally well-tolerated, with grade ≥3 adverse events reported in 46% of patients receiving the targeted agent and 36% of those receiving placebo. No treatment-related deaths were reported.

“From my point of view, these results are practice-changing, mainly because this is the first randomized clinical trial exploring precision medicine in CCA,” commented Angela Lamarca, MD, PhD, MSc, Consultant in Medical Oncology, Christie NHS Foundation Trust, Manchester, England. “Those patients who had an IDH1 mutation were benefiting from ivosidenib, mainly in the form of PFS. We are having 22% of patients free of progression at 12 months and 32% at 6 months, with 0 patients in the placebo arm.”

The extension in OS from 6 months to 10 months when adjusted for crossover is “definitely clinically meaningful for patients with CCA who unfortunately have a very poor prognosis,” Dr Lamarca said. “When we step forward, it is important that we make sure that all our patients have access to molecular profiling, which at the moment is a challenge in some countries.”

Future studies should investigate ivosidenib as first-line treatment for patients with CCA and IDH1 mutation, in addition to its use in combination therapy and as adjuvant therapy, said Dr Abou-Alfa. 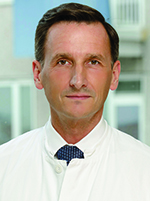 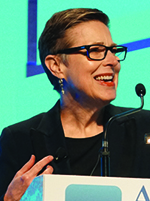 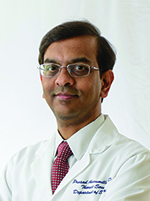 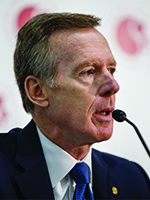